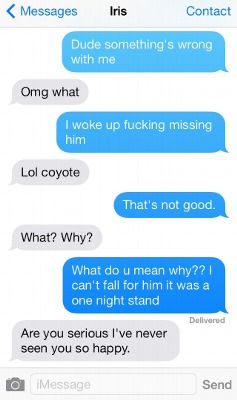 For the next two weeks I made Johnny wait.  I was working 60 hours a week and had a lot of stuff going on, and was trying to not let myself fall for him.  We texted constantly, and every time my phone made a noise I hoped it was him.  I couldn’t fight off the butterflies that took over my stomach.  I couldn’t stop smiling when he texted me.  What is this feeling??  The day after I left his house something strange happened to me and I was very uncomfortable with it.  I woke up missing him like the biggest rookie ever.  What was I doing???  I kept telling myself that all it was was a one night stand and to forget about it.  I didn’t want to get involved like that with anyone; I had just quit my job and had huge plans to go traveling around the world to visit every member of my family.  I couldn’t get attached, plus I figured he had so many girls in his life that I was just another one of them, and tried to tell myself that he made every girl feel the way he made me feel.

But he kept texting me, and he kept being extremely nice to me, and kept filling my heart with such positive vibes that I couldn’t stop myself from texting him back, and I couldn’t fight the fact that something about him intrigued me.  Something in his eyes I didn’t expect to see, some kind of pensive understanding he held inside of himself, I could see it when I looked into his eyes.  I honestly expected him to be shallow and arrogant before I met him, but he was additively calm and exuded a serenity that was completely magnetic for me. His eyes almost had a sadness to them, some kind of deepness like he knew more than he let you believe.  I didn’t want to fall in love— but it didn’t matter. 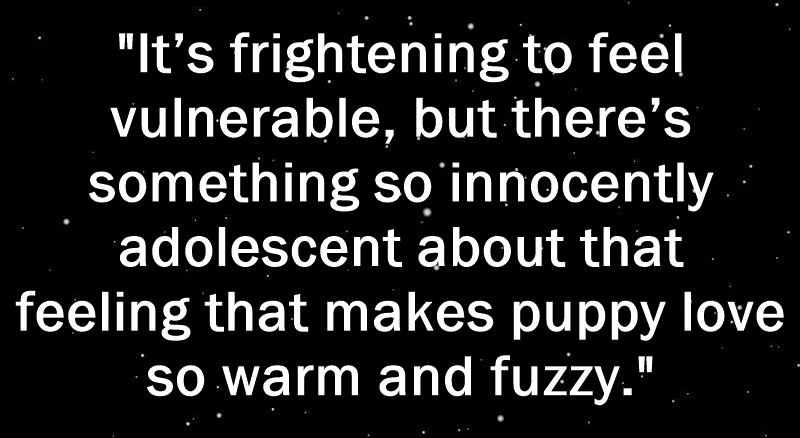 Every picture he would send me would jump out of my phone and into the colors of my head and electrify my soul as it painted this beautiful picture on the walls of my mind.  I felt like running to him every moment of the day; he was like a drug and I didn’t give a fuck that I was addicted.  I felt like I knew him my entire life.  Then fuck I would catch myself thinking shit like that and think how ridiculous I sounded.  I tried so hard to not trust him and to not feel this way, but at a certain point I stopped trying.  I would drive to his house at 100 mph and scream at the top of my lungs in my car before I got out to release some of the excitement spilling out of my body.  I could get high by meeting his eyes with mine and having these wordless conversations with him.  It was like I was hypnotized.  It was so electric.  I was intrigued that someone could hold my attention and excite me so much; I get bored very easily and tend to find beauty in most people and therefore rarely get attached to just one person.  But he was different, he fascinated me.  The amount of happiness and comfort I felt from being around him scared me because I’ve never truly needed anybody before.  It’s frightening to feel vulnerable, but there’s something so innocently adolescent about that feeling that makes puppy love so warm and fuzzy.  And the more we talked the more we realized we have the same ambitions and goals in life.  But I was very open with him and not wanting to get attached, and warned him to not like me too much because I was leaving to go traveling.  And he tells me don’t worry, he would never want me to not go traveling but it’s too late on the liking me too much thing.

I just fall deeper and deeper into his vibe and he falls deeper and deeper into mine.  My body started needing his.  I started needing his touch, and the fact that I hadn’t even kissed another person since the day I met him made me crave him even more.  I had no interest in hooking up with anyone else, and really wouldn’t notice if he suddenly became the only man on earth.  I was either about to be that girl that gives up her dreams of going traveling for a man, or, perhaps I found someone to pursue my dreams with.