By popular demand – Johnny Sins POV of the first night he met me, Kissa Sins!!

so I figured I’d flirt a little and leave a comment on that pic. I commented “that’s too nice of a camera for porn!” It worked, she replied back flirting with me and did something no ones ever done and gave me her # over the comments. I take a screen shot and text her that she better delete it before weirdos start hitting her up! I spend the next hour scrolling through all of her pics, disregarding anything I have to do. With each pic I become more and more captivated by her. Something about her seems so positive, free spirited, sexy, cute and shy all at the same time. Always covering half her face with her bangs, every pic was a bigger smile or laugh than the next, like she didn’t have a care in the world. We play a fun game of verifying our identities by taking pics of ourselves, can never be to careful over social media! Kissa takes a pic making a J

for Johnny, in her bra at work of all places which I love. I make a C for her nickname Coyote with my hand and send it to her. I must have taken that pic 100 times before I had one I felt good enough sending her. After joking about it with her, we determined we both did the same thing! I was hooked and we set up a date to meet up for drinks a few days later. I figured it would never happen because most things too good to be true usually are. For the next couple days I cant resist looking at her pics and fantasizing what she is going to be like.

It’s the night of our “date”. I’ve learned Kissa never calls anything a date so I doubt she considered this one. Like usual, I’m nervous but have been looking forward to it all day. I make a drink, Black Label Johnny Walker on the rocks to calm me down. I’m having an unusually hard time picking out something to wear. We’re meeting at a little hole in the wall bar down the street from my house but I still can’t decide. Jeans, yes. Which ones? T shirt, button up? And shoes? Which shoes?? Anyway i’m late and I really want to get there first, get settled in and have a drink before she arrives. So I’m dressed, feeling

good, looking good and I’m ready to go. I snap a pic and text it to her and she does the same back. At this point I’m pumped because she looks amazing. I’m nervous though because I’ve been in porn the last 8 years and have only dated and been out with girls in the business, never a “civilian” as we like to call them. I just moved to the neighborhood and I’ve never been to this bar before so I didn’t know what to expect inside. I get there and go in through the back entrance. It’s a small, local, hole in the wall bar, a little dirty with a few pool tables and a small pool tournament going on. I sit at the end of the bar and order another Black Label on the rocks. I check my phone, I’m a few minutes late but she texts me saying she will be their soon. She sends a pic of her sitting in her truck with no panties and her dress riding up high so I can see her pussy! I get really nervous and excited at the same time but the Jack Daniels is certainly helping calm my nerves. She says she got pulled over for speeding because she’s late but she’s on her way and didn’t get a ticket. I think, this girl is awesome!

I have a clear view of the back door from the bar stool I’m sitting in. I see her poke her head in and come through the door. She looks stunning, dirty blonde curled hair, a tiny little black dress so short she can’t really walk normally and heels that make her legs look a mile long with black thigh high stockings. It seems like everyone in the bar goes quiet and watches her walk in and wonder why she was their and who she was meeting. Luckily its me:) She struts over to me, in kind of a shuffle because her skirt is so short and probably because everyone is checking her out. She’s so sexy with her short ass dress and sweeping hair and so cute trying to pull her dress down and trying to cover her huge smile with her hair. We hug and she is totally warm right away, she sits down and orders a shot of Vodka, small talk begins. I have no clue what we talked about, probably any first date basic conversation shit but I could tell I really liked her. She was fun, loose and carefree. We both have a few drinks and the conversation flows smoothly, but I’m definitely not thinking about that. A little subtle twist on her bar stool reveals she isn’t wearing any panties! She gives a giggle and looks down and pulls her skirt down just enough to cover her pussy. I’m horny as fuck but have no idea what to expect because she is the first non porn girl I’ve been out with in a long time. Well besides one other that turned out to be a disaster.

Were having a great time and go back to my house. We go outside and sit on the patio on the love seat. After a little small 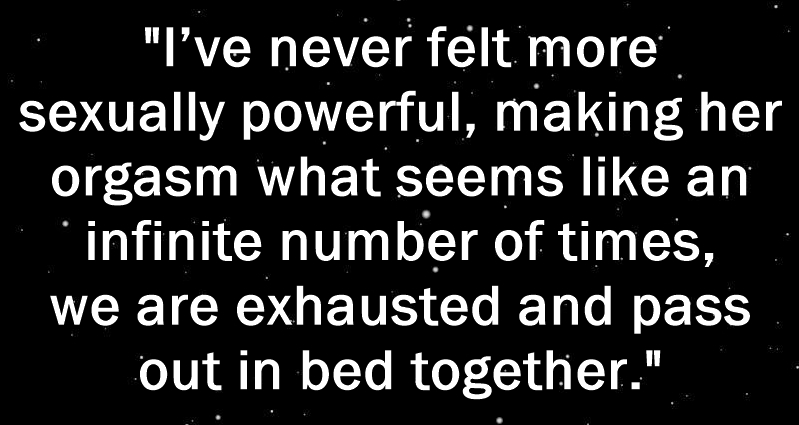 talk I go for it and start making out with her. Its electrifying, she instantly gets me in overdrive by biting my lower lip and pulling on my earlobes as we make out. It’s on, neither one of us can stop ourselves after making out like that. I pick her up and carry her inside. We rip each others cloths off, she’s so fucking hot I am the happiest guy on the planet. We have mind blowing sex for who knows how long, probably not that long though because I don’t think I could’ve held out for long. She completely catches me off guard, I’m in porn but have never been with anyone that is so sexual and orgasmic. After finishing in a pool of our own sweat and cum we fall asleep on the couch. We wake up sometime later and she expresses a desire to go home. Later on she told me she had planned on making this her first one night stand. We laugh to this day joking about what a failure of a one night stand it was. I tell her she doesn’t have to leave, nor do I want her to and we should have a snack. Every night I make delicious yogurt snacks, with peanut butter, protein, fruit and nuts. I make her one and she loves it. At this point I know she’s a catch. We eat our yogurt snacks and chill out and watch Archer on netflix. She laughs and giggles through it saying she never watches television, which is awesome because I don’t watch much either. Shortly after we are into round two, this time the sex is even more intense than the first time. I know she likes it deep and can take it so I don’t hold back much this time. We fuck all over the house, we hit the pool for some doggy style after getting hot and sweaty inside. I take her inside and lift her and fuck her deep against the wall. I’ve never felt more sexually powerful, making her orgasm what seems like an infinite number of times, we are exhausted and pass out in bed together.

The next morning was not awkward at all like it can be. We of course have morning sex and I get up and make her breakfast. The same breakfast I make every morning for myself. She was so appreciative and loved it, eating everything. I remember being compatible with her every step of the way, from our conversation, kissing style, sex, eating habits, pretty much everything. We eat breakfast outside by the pool, talked and made plans for our next adventure, hiking in Malibu.